One of the most famous times of the year on New Zealand’s South Island is Lupin flowering season. For about 4-5 weeks at the end of each year, the center of New Zealand’s South Island bursts into color – purple and pink and blue and yellow lupins sprout up along lake sides and in riverbeds in Mackenzie Country, making the already-stunning views even more incredible. From all around the world people actually travel to NZ purely for this occasion and it’s not uncommon to see more than a few wedding photoshoots in areas where the Lupins are their most beautiful. 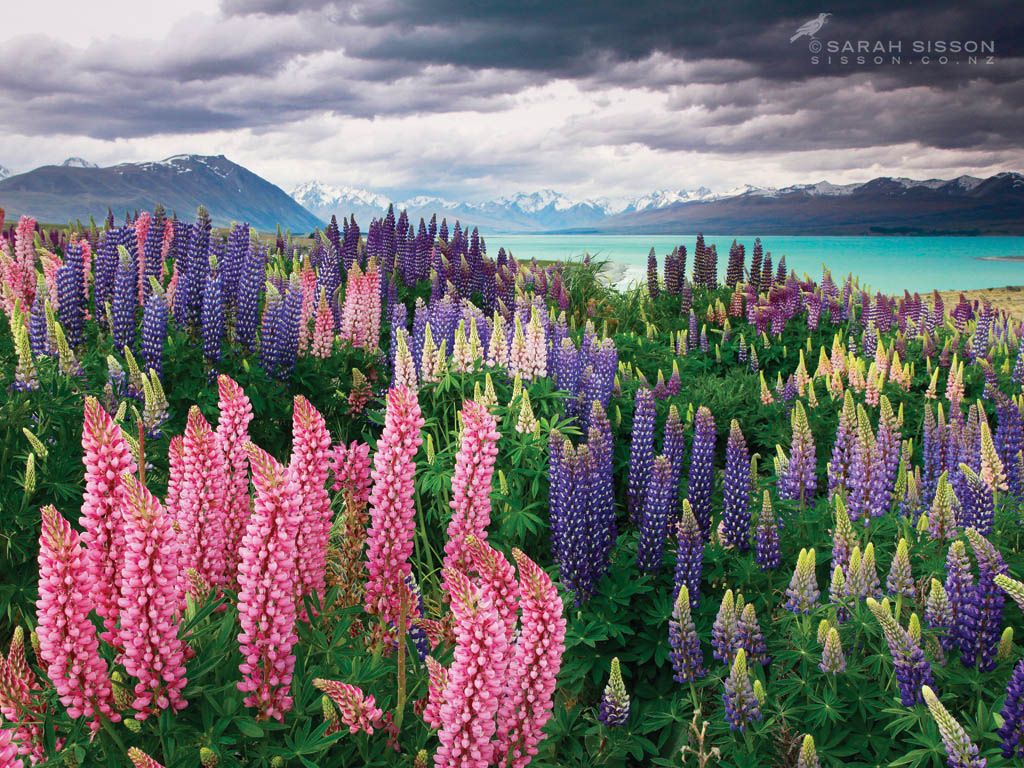 Lupins are not a native species to New Zealand. Lupins in New Zealand are an introduced species of Lupin called Russell Lupins. Funny enough, Russell Lupins are actually a breed of a few different Lupins that were created by George Russell in the UK after they were too introduced in the 1820s.

Although beautiful, they are considered an invasive species and some effort is taken to keep Lupin numbers under control around New Zealand. However, there are a few places, where although a pest, these flowers prove to be huge tourism boosters and for that reason, remains untouched. Of course even in areas outside of these tourism hot spots Lupins still grow freely, and during the right time of year, you can find them in lots of places!

When to see Lupins in New Zealand 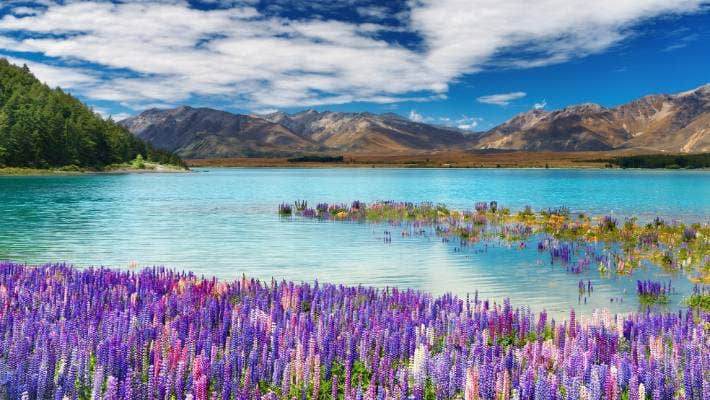 You may hear that Lupins flower from September to February. Although somewhat correct, if you came to New Zealand to see Lupins then don’t come any earlier than mid-November and are gone after mid-January. The reason?

Well, this is the peak of the Lupin flowering season and if you’ve seen some pretty amazing photos of the Lupins, I bet they were taken during this short period of time!

So if you’re coming to New Zealand to see Lupins, be sure to come between late November and mid-January!

Where to spot the Lupins in New Zealand? 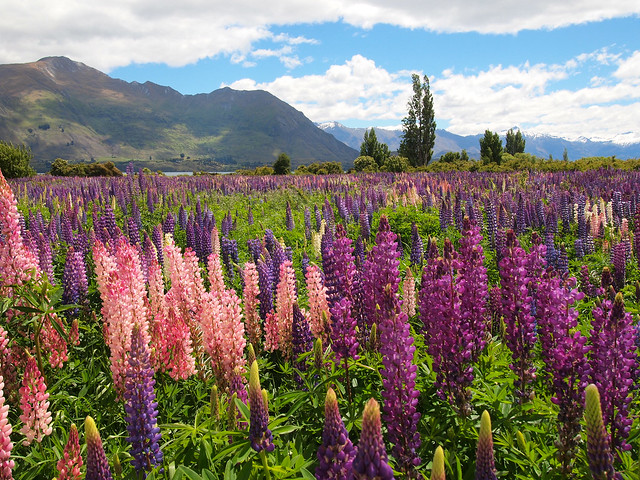 You can see Lupins in many places around New Zealand including the North Island. The most common place to find Lupins is within the Mackenzie Basin on the South Island though. The Mackenzie Basin includes places like Mt Cook, Lake Tekapo, Lindis Pass, and Twizel. In fact, if you simply drive through Mackenzie country at the right time of year you’re guaranteed to see plenty of Lupins.

That being said, there are a few places that are specifically known for having beautiful Lupins. If you’re coming to NZ and want to see some Lupins, here are some places you should make sure you check out! Mount Cook Road is a famous stretch of highway that leads to the Mount Cook Village in Mt Cook National Park. It’s one of the most beautiful drives in NZ and a place you can spot Lupins. Although the Lupins here aren’t as present as other places, you simply can’t miss seeing them with the stunning backdrop of Lake Pukaki and the Southern Alps. Lake Tekapo is easily the most famous place in New Zealand to see Lupins. Along the shores of Lake Tekapo thousands of Lupins grow in a huge range of colours. From purple to pink and every shade in between, the Lupins here are really something special! Wedding photoshoots during Lupin season are extremely popular and you’ll often see newlywed couples getting beautiful photos together in a field of Lupins!

Be sure to get a great shot with the Church of the Good Shepherd (another famous attraction) as well along the Scott Pond. With the stunning blue glow of the lake and the surrounding mountains as a backdrop, this is the most beautiful place to see Lupins in NZ.

Along the Ahuriri River, thousands of Lupins grow freely. To me this is the place where you’ll likely see the most Lupins in once place – they are literally everywhere! The best place to get close to the river is just after the small town of Omarama.

If you’re driving from Queenstown head past Omarama airport and look for the Ahuriri Bridge Campsite on your left. Here you can park and take a quick walk along the river. On a calm day, sections of the river give off perfect reflections of the Lupins!

Purple and pink Lupins seem to be the crowd favourite in New Zealand, however, if you want to see stunning yellow Lupins then along the edge of Lake Hawea is one of the most breathtaking locations.

If you’re coming from Wanaka the best place to stop along Lake Hawea is as you first follow the highway left towards Lake Wanaka around the Isthmus Peak Trail carpark. Here on the cliffs the Lupins grow almost as tall as you and make for some pretty impressive photos! In Queenstown itself you can see Lupins in a few places, however, the best place to see them is along the edge of Lake Wakatipu near Glenorchy. Along this stretch of road, you can see Lupins of all colours. My favorite spots are closer to Glenorchy than Queenstown but the best part about this place is that you can find your own unique place to enjoy them! Just find a pullover bay and explore – that’s what New Zealand’s about! Lake Wanaka is another breathtaking place to see Lupins in New Zealand. Around the lake, there are hundreds of places to see them and you can even see them at the famous Wanaka Tree! Lupins of all colors grow here but the yellow lupins seem to only grow on their own whereas the purple and pink grow together! Get adventurous in Wanaka and take a drive, you’re sure to find a beautiful patch of Lupins with a stunning backdrop!

Lupin season in New Zealand is a great time to visit. With the flowers out, NZ’s already stunning landscape becomes all that more beautiful. With the places mentioned above, your Lupin road trip will be one to remember!